Actor Omar Sharif’s final film “1001 Inventions and the World of Ibn Al-Haytham” has been dedicated to his legacy said the film’s British Producer and Director Ahmed Salim.

Legendary Oscar-nominated actor Omar Sharif, who died on Friday 10 July 2015 in a Cairo hospital following a heart attack, still has one more film to be released later this year.

British organisation 1001 Inventions is producing a short film that will be the last film for the late actor. Sharif’s leading role in the educational short film “1001 Inventions and the World of Ibn Al-Haytham” was his final performance.

Ahmed Salim, Producer and Director of the film said:

“We were very saddened by the news of the legendary actor’s death. Working with Omar Sharif  was an honour to all who worked on the production of the film. He worked tirelessly, despite the onset of his failing memory, to honour 11th century Arab scientist Ibn al-Haytham. Sharif came out of retirement specifically to do this film as he strongly believed it would help educate children all over the world about the origins of the scientific method, light science and the camera obscura. 1001 Inventions dedicates this film in his honour.”

Omar Sharif takes the lead role in the short film that brings to life the story of Ibn al-Haytham’s quest to discover the nature of light and vision. The partly animated storyline is intertwined with a live-action backstory starring Sharif, who guides in the quest of discovering Ibn al-Haytham’s journey to understand how we see, and the principles of light and optical theories.

“Most people don’t know that I studied physics before starting my acting career so honouring the scientist Ibn al-Haytham, the Arab grandfather of the camera obscura — the device that forms the basis of photography and cinematography — is of personal interest to me. I hope this educational film will spark ambition and creativity and will culminate my career with an inspiring message to young people to follow their dreams.” 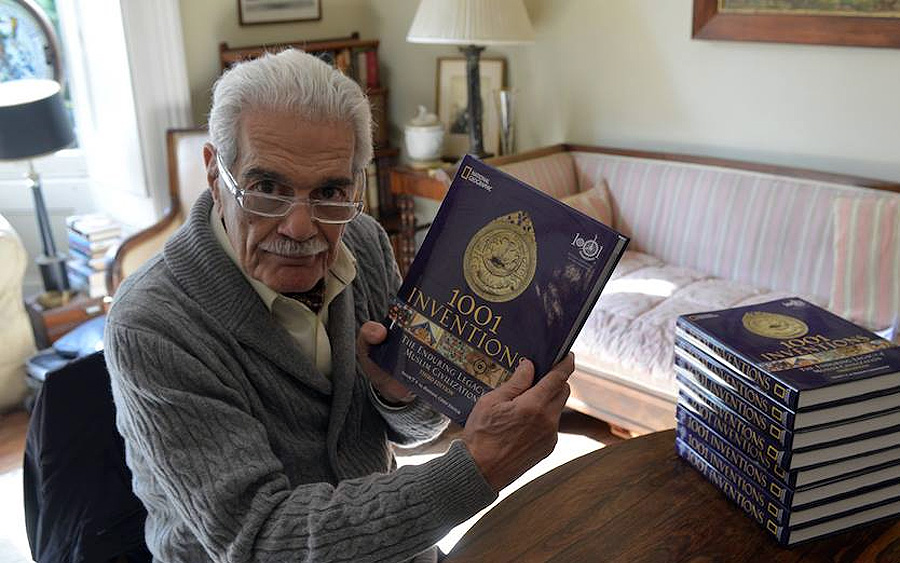 Filmed in London, “1001 Inventions and the World of Ibn Al-Haytham” presents Omar Sharif as a knowledgeable older gentleman helping his granddaughter with her challenging science homework through narrating the thrilling story of Ibn al-Haytham.

The film, currently in post-production, stars Macey Chipping, voice over by Khalid Abdalla and music by Sami Yusuf. “1001 Inventions and the World of Ibn Al-Haytham” will be launched later this year as part of the United Nations proclaimed International Year of Light 2015. Award-winning British organisation 1001 Inventions brought together an international team of partners to produce the film and its accompanying educational resources including UNESCO, National Geographic, the King Abdulaziz Center for World Culture and UAE-based company Blink Studios.

“Omar Sharif spent a life-time in the movie industry and we hope his final film will define his legacy by helping to educate and inspire young people,” added Ahmed Salim.

The high quality trailer for the film is already available online at www.IbnAlhaytham.com

Contact 1001 Inventions to obtain rights to exclusive footage of Omar Sharif speaking about his performance in this film. https://vimeo.com/1001inventions/review/133167245/86f9028e34

Contact 1001 Inventions to obtain high resolution photographs of Omar Sharif on the set of this film and other production shoots. http://www.imdb.com/title/tt4445918/mediaindex?ref_=tt_pv_mi_sm

Omar Sharif working behind the scenes
Pictured here, actor Omar Sharif working with director and producer Ahmed Salim on location in London. The new short film on Ibn Al-Haytham with voice by Khalid Abdalla and music by Sami Yusuf is in post production for release later this year.